Testimony of Pieter le Roux in Leaves of Healing

I obtained this information from Dowie's publication "The Leaves of Healing", October 8, 1904. 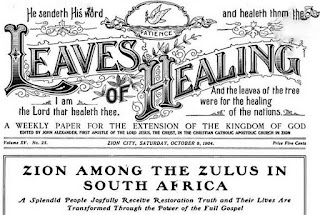 At your request, I will tell in a few words how God has lead me into Zion.


Editor's Note: " The ordinary greeting is Peace to Thee instead of Good Morning and the usual response is Peace to thee be multiplied. Harlan - p. 15. In the Leaves of Healing, Bryant mentions they were greeted by "Ukuthula!" (Peace). Ukuthula akubekuwe! (Peace to you) came back the hearty response.

My conversion took place in the fifteenth year, and I have been a Christian worker more or less regularly since then. The previous year I had left my father’s farm to go to a boarding school. While there I conceived the idea of being a school teacher, and accordingly went to the normal training school for teachers in Cape Town.

With my dear wife as an earnest coworker, I started in what was practically virgin soil. God blessed us abundantly. Conversions came right away. Seven years later the Church among the Zulus numbered over two thousand. The Dutch Reformed Church took up the work very heartily. The Lord sent us good, earnest native preachers, who came to us from different denominations. With their help it became possible to extend far and wide. 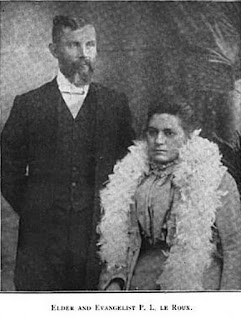 After several years spent in continually going around the country and seeing the results of our preaching to the Zulus, it became apparent that there was a great lack of real, deep spiritual work. The conversions appeared to be very shallow and our converts proved very half-hearted Christians.

They did not give up their native beer, went on defiling their bodies by smoking a strong and poisonous weed, known as dagga, and in many other ways showed that their religion had little power to thoroughly change their lives. It was a common thing to hear people say that they would have nothing to do with a Kafir who had been spoiled by religion.  This state of things caused us much grief, and we cried to God to be shown what was wrong. Meanwhile we had heard of Zion: Leaves of Healing had come into our hands, and had brought new light. At last we become convinced of the fact that great blessing could not be expected while we were connected with the church to which we belonged.

We gave up the use of drugs, and began to preach Divine Healing to our people. Many at once turned to the Lord and accepted the teaching. The local authorities of the Dutch church were stirred up over the matter and would not have this new teaching. Several conferences, some very stormy, took place, and at last we were threatened with expulsion. In this perplexity, I turned for counsel to some of the ministers of the church.

In answer to my inquiries they all stated that Divine Healing was in the Word of God: it was true, however, at the time, they said, it was dangerous ground for public speaking, and would cause trouble. The one man to whom I especially looked for counsel was my old minister, Andrew Murray. In his letter, he plainly stated that Divine Healing was the teaching of the Word of God - a glorious Divine Truth. 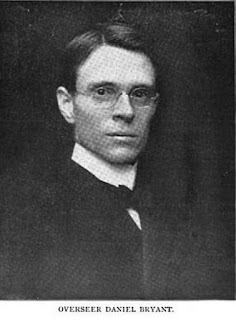 At the same time, he said that if I insisted on publicly teaching it, I might expect to be put aside as the church would not allow it in the public ministry of the Word. It was thus apparent that it was useless to try to convert the church. It only remained to get out as soon as possible.

When we came to Zion, many of our people in the Dutch church came with us.They were so convinced of the truth that no amount of persuasion could move them. They find no difficulty in accepting the dear General Overseer as the Prophet of the Restoration. God has richly blessed many of them, not only in healing their bodies, but also in delivering them from evil. Drink, drugs, and tobacco have long since disappeared from among them.


Editor's Note: Sundkler quotes one of Mahon's key evangelists as mentioning that he felt he owed all this to Dowie in the great country of the United States: "I believe that he is the Restorer, although it was very hard for me at first to believe this because I was taught that John the Baptis would come again as he was." It was only in September, 1904 that Dowie would claim that he was the First Apostle.

Personally, I desire to thank God for many blessings to me and my house. We have been delivered again and again, and now serve Him with a joy we never knew before. Several years before leaving the Dutch church, it had become clear to me that the method of baptizing by sprinkling was utterly unscriptural. I therefore counted it a great privilege, to be baptized by Triune Immersion, and with my dear wife, on July 11, 1904. 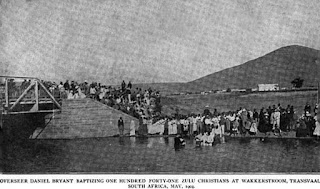 I also desire to thank Him for the blessed privilege of being ordained, with my dear wife, to the ministry of the Christian Catholic Apostolic Church in Zion, and of being associated with the Prophet of the Restoration, our beloved General Overseer, in his great and glorious work for God and humanity.
Faithfully yours for God and Zion,

Editor's Note: Harlan believed that "the worship of Zion is what takes up most of the spare time of the people. In fact they make a business of religion. Morning, noon and night, cottage prayer meetings are held in most of the homes, and if one has additional time and further inclination he may attend Bible readings of Healing Meetings at Hospice or Tabernacle, at odd hours."